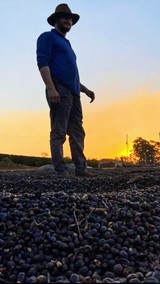 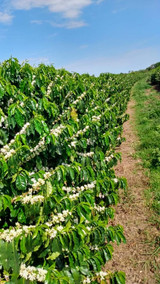 Descendants of Italians and Portuguese, the Ignotti Family began its history in coffee production in 1986. Wanting to bring the family closer, Sebastião Almeida, father of Lúcia Elisa Ignotti, encouraged the move of his daughter and son-in-law, Ricardo Vagne Ignotti, from Paraná to the city of Patrocínio, Minas Gerais, giving them a small piece of land, so that they could start farming. The cultivation of coffee began in the volcanic region known as Chapadão de Ferro, in the city of Patrocínio, MG. Seeing the need to expand production, the Ignotti Family sold the land, which started their dream, and acquired a larger property in the same region, where they grow coffee to this day.

This area has an elevation of 1,180 meters. In 2016, the production underwent a new transformation, when the family expanded its borders to the region called Caixetas, located in the city of Guimarânia, MG. This area has a minimum altitude of 1,070 meters and a maximum of 1,090 meters. Together with his parents, the 29-year-old Vinícius Wagner Ignotti, a member of the 4th generation of coffee growers, seeks to produce excellent coffees in the Cerrado Mineiro, in the cities of Patrocínio and Guimarânia, and for this, both farms are undergoing the process of certification.

Currently, the areas are managed by him and his father Ricardo, and his mother Lúcia takes care of the administration of the farms. The creation of the Ignotti Specialty Coffee Group came to strengthen the family's history and consolidate the constant search for the production of specialty coffees, valuing sustainability and caring for the environment.

The selected coffee was harvested mechanically, in a percentage of 80% of mature beans, and later taken to the yard, starting the drying process, which is carried out naturally, drying in 15 days. After this process, the coffee was sent to the bin, where it rested for another 10 days. After the rest, the batch was processed and stored in the warehouse.