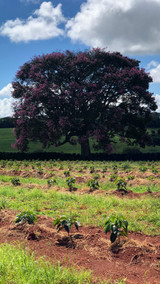 Fazenda Nossa Senhora das Graças is located in the municipality of Ibiraci, Minas Gerais, having started through the great legacy passed on through the family through Mr. Nelson Alves Peixoto, born in 1920. Nelson Peixoto as he was known only received an elementary education in a rural school and never left his farming community in his early years, but his legacy goes far beyond his formal education. Nelson built a family farm and agricultural production system for his family, neighbors and workers, admirable even today for its sustainability. With his death, a part of the farm, called Boa Vista, due to its beautiful location on a hill with a 180-degree view covered with coffee, waterfalls and the magnificent Rio Grande, became the property of Senhora Maria das Graças Peixoto, the youngest daughter of her five children; a warrior woman mother of three daughters: Isabella, Lais and Ana Claudia.

For many years, she took care of every detail of his property from planting to harvesting coffee. After years of hard work, Mrs. Maria das Graças decided it was time to rest, passing the administration of her property to Mr. Elvis Vilhena Faleiros who is married to one of her daughters, thus uniting two of the most traditional coffee families in the municipality of Ibiraci, MG. Elvis Vilhena Faleiros is a great connoisseur of the art of coffee production, and, like the Peixoto family, Elvis comes from a family with a coffee heritage and is part of the third generation. Elvis brought to Fazenda Nossa Senhora das Graças the strength of young work with the knowledge of those who were raised in the coffee plantation, always seeking to implement new techniques and valuing sustainability, always producing coffee responsibly, cataloging the best beans.

While Elvis is literally feeding new seedlings into the soil of his farm, his team is figuratively planting the next generation seeds of specialty coffee growers. While they work hard today to continue their family legacy, they work even harder to ensure it continues beyond them. Whether they are his own children or the children of the many farmers who work with him on their farm, Elvis's future and legacy depend on them.

"I believe that all knowledge acquired should be passed on and not saved for a single generation," says Elvis Vilhena Faleiros.

This lot was harvested at the point of ripe cherry, passing through a washer to separate the best cherries and dried in a suspended terrace for 21 days, finishing the drying in a cement terrace, always opening and closing the top at the end of the day, never going above 30ºC, then rested for 60 days in parchment to be milled. The farm works with biological pesticides that do not harm the environment and fertilizers made of organic mineral formulae, to preserve our fauna and flora.